All Saints manor house owned by Matthew Michell 1751-1817 disappeared in the 1820s, it is said after a disatrous fire, but I have seen no evidence of this. However, the coach house of the manor survived and was converted into six farm worker’s dwellings that became known as Great House, or colloquially big ‘ouses; perhaps because of the height of the building, or a reference to Chitterne Great Farm (Chitterne Farm and Chitterne Lodge estate), or to the demolished Great Manor, since All Saints Manor Farm was once known as Little Manor. Whatever the source of the name, it appears to have been used from the 1800s until the 1970s when the MoD sold the building.

Six families lived in the converted dwellings numbered 37, 38, 39, 40, 41, and 42 at Great House until at least 1925, but by 1939 the six had been altered again to provide three dwellings numbered 38, 39 and 41. This alteration may have coincided with the construction of the first council houses in the 1920s. By 1955 the dwellings were renumbered yet again under the War Department’s numbering system when the Brennan family lived in 967 and the Burch family in 968.

The building became a single dwelling in the 1970s, when owned by Peter and Pru Heaton-Ellis, who lived there for almost 40 years. It was re-named The Coach House and numbered 37. 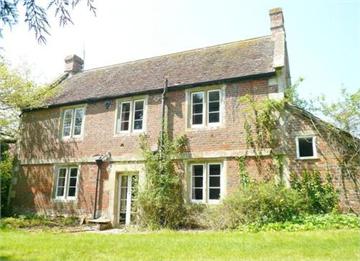 Who remembers this photograph of Glebe House from my blog of 20 May 2013? A lot has changed since then. Glebe House now looks quite different and has new owners.

When meeting one of them today I remembered that somewhere I should have a copy of an extract from William Edgeworth Sanders Recollections, sent many years ago by one of his descendants, in which he referred to a visit he made to this house as a boy, about 1802. Amazingly, I found the copy straight away!

It appears that in those days the house was inhabited by the farm bailiff who ran the farm attached to The Manor next door. In 1800 a gentleman by the name of Christopher Fricker (1755-1815) lived at The Manor, which he leased from the Methuen family, lords of Chitterne St Mary. William Sanders tells us that his father’s cousin, Thomas Sanders (1769-1802), was the previous inhabitant of Glebe House or Holmcroft as it was then. It must have been about this time that the two black barns attached to The Manor were constructed. Farming business was booming and yet only a quarter century later the Methuens put the Chitterne St Mary estate up for sale.

I digress, what of William Sanders (1792-1880), his recollections and his visit to the house above? He says:

“When I was about eight or nine years old my dear father (Benjamin Sanders 1761-1836) took me riding with him on a horse, but with stirrups. Which I was not allowed to use until I was over twelve years of age. We went to Abbotts Ann where I slept at Aunts some ten miles distant from Bullington where my father farmed about 280 acres of his own land, and about 80 at (Barehill) Andover.

On my journey to Chiltern, (the village name was often spelt this way in those days) which was distant about 21 miles, I was not fatigued in the least, but much attracted to the new sights to me. Passing through Amesbury, I was much astonished with the large stones of Stonehenge, and about seven miles after Chiltern is reached, which was a large village. The house of Mr Frickers if I recollect right was the best house in the village.

My father having administered to estate of his cousin, Thomas Sanders. We went to his late residence, which was a small farm house. The Bailiff who managed the farm, put our horses into the stable. The winnowing of corn was going on in the barn. I was much struck. I can remember with the appearance of two young women with very large brimmed silk bonnets and low crowns, which had long since been out of fashion in Hants.

The Sanders family lived many years in Chiltern, Grandfather (William Sanders 1716-1791) had I believe two brothers living at Chiltern and one at Andover. Jordan Sanders (1729-) who kept the shop where Parker lived in my time and occupied by Dowling. John (1721-) I believe died unmarried. Thomas had one son to whose effects my father administered. His property fell to his mothers relatives.

My Grandfather rented land from the Marquis of Winchester at Amport, which he occupied many years until Mr Paulet came to the title and estate, and then much of the land was required for the Park. During his life he was very intimate with Grandfather, and told him there was a plate always laid on the table for him whenever he chose to dine with him.”

The Sanders family are remembered on several memorials on the walls of Chitterne St Mary Chancel.

Note: The Paulet family preceded the Methuens as lords of the manor at Chitterne St Mary.