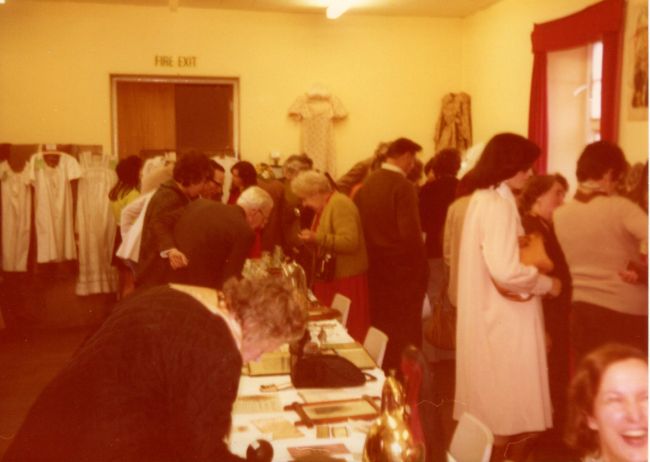 An exhibition of bygones was staged in the old village hall in the 1970s. It was held after 1971 and since this was written a blog reader has suggested 1975. The village school had been converted to a village hall and opened in 1971, it was replaced in 1999 by the present village hall.

The following photos of the 1970s exhibition are a recent addition to the archive collection thanks to AS, who tells me that many of the items on display came from 98 Chitterne, the home of the Feltham family.

Villagers and visitors at the exhibition in the main hall. The two gentlemen may be Philip Purle (leaning over) from the Village Shop and Brian Gorry (hands in pockets) of 29 Robin’s Rest. CB has identified more of the group studying the exhibits at the back, from the left: Christine Sprack (wearing green top); Maureen Sprack; possibly Bert Bailey; possibly Marilyn Wood; Philip Purle; Phyllis Stevenson. Could the lady in the bottom right corner be Joan Robertson of Glebe House? Winnie Spratt of 70 Bidden Lane by the window also appears in the next photo.

Here she is on the right running the raffle with Nora Feltham of 98 Codford Road.

Various old costumes were on display.

Containers and implements of all sorts.

A sale of the Chitterne estate poster of 1815 and various editions of newspapers, photographs and journals.

AS tells me that some of the items were so precious that he slept in the hall overnight to protect them. I came to the village in 1976 and I don’t remember this exhibition being staged so it may have been between 1971 and 1976 when colour photography was in its infancy. The photos have that kind of hue from those days, compared with the first photo of the hall which was taken a lot later.

If you recognise anyone else on these please let me know, and if anyone can date the exhibition exactly it would be good to know. I can be contacted via the menu in the top right corner or on facebook.